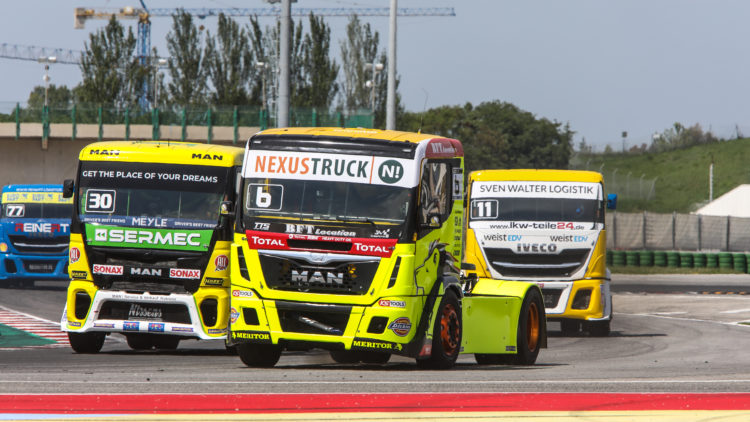 The partnership between NEXUS and the Lion Truck team, which carries the NEXUSTRUCK brand, has been a ‘roaring’ success. Fresh from having been proudly exhibiting in the Le Mans 24 hour race, and with a busy calendar ahead, Lion Truck team marketing manager Barbara Speicher gives a pit-side view of prospects for this season.

What is the race plan for this year?

Our goal is to win for the third time the title as France Champion. Of course, nothing is gained in advance in motorsports but we now enjoy a comfortable lead in the Championship after the first 2 rounds of France. This season is also marked by a return to the European Championship, unfortunately we cannot participate in all the rounds (some dates are the same as the French Championship) but our performance after the first Italian round at Misano is very encouraging because our driver Anthony Janiec has recorded the 4th best time in Super Pole.

What are the expectations?

Today we are classified as 10th in Europe, and we have attended only one Grand Prix out of 2. This result is encouraging! Our goal is to get closer to the Top 5 by the final race at the Jarama circuit in October. The European level is very high and it’s a nice challenge to face, it forces our top team to give its best!

How was the experience in Le Mans for the 24th hours?

It was a unique experience! We had the great opportunity to be present at one of the biggest sports events in the world, thanks to our sponsor TOTAL racing. Only the GP Camion brings a lot of visitors: 180,000 in France and 415,000 in Europe. These events are not just races but really spectacular shows that anybody can enjoy and really should do it at least once in a life.

What about the pilots? Anthony is considered to be the NEXUSTRUCK pilot and he brought a lot of victories to the team. When did he decide to become a pilot?

Since very young he was already in the motor environment: his father was riding a motorcycle and his mother was a photographer of cars. He started very early with karting, then from 2000 to 2007 in F3 where he was Champion of France and Vice Champion of Europe twice.

What kind of training does he do?

Each race is very short, around 20 minutes, but it’s very intense and inside the cabin it’s very hot, it can reach more than 60 degrees. Anthony is trained all year by a professional coach, especially in the off-season, to get in shape before recovery. He had a severe accident in 2017 and since then he has to do a strong training before each race.

What is the biggest challenge he has faced in his career?

As mentioned before, in 2017 he had a bad accident with his car 2 weeks before the final race of the France Championship when he only needed 2 more points to win the title as France Champion.
Despite his injuries and the advice of the doctors, he had to go beyond the pain to get back in the truck and get his first title as Champion of France. He fought all the season for this title and only with perseverance, passion and support he succeeded and won the title!